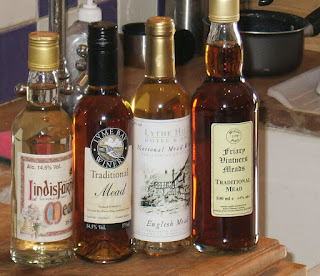 Some "half bottle" Samples of Commercially made Meads
During some recent difficulties in my mead making (stuff like not enough nutrient/too higher starting gravity/not enough "pre-pitching" oxidation of must), someone at one of the forums I post at, suggested that I try to obtain some commercially made meads to taste and measure. "A damn good idea" I thought.

Previously, when I'd visited Middle Farm, for some cider, I'd noticed that they did have some commercially made mead, but only 1 or 2 different types. When I visited yesterday, I found that they keep considerably more than that, so I got myself the 4 half bottles pictured.

Today, I proceeded to open each bottle, take a gravity reading, tranfer most of the sample back into the bottle, retaining a small amount to take a pH measurement from and then drank the small amount to see what it tasted like (I had previously tasted commercially produced mead, but that was some years ago).

So, the readings were as follows - Oh and I'm not an experienced wine taster so I'll just put a basic description according to what I found.

The Lindisfarne Mead. This is the lightest in colour. It gave a gravity reading of1042 and a pH reading of 3.01 - the taste was sweet, with a very light, barely obvious honey flavour. Palatable and pleasant.

The Lyme Bay Mead. This was the second darkest of the samples, being a "whiskey" colour. It gave a gravity reading of 1040 and a pH reading of 2.90 - it was equally sweet, but with a much stronger honey flavour. Very nice.

The Lurgashall Winery Mead. This was between the Lindisfarne and Lyme Bay for colour, similar in tone to a white wine. It gave a gravity reading of a massive 1065 and a pH of 3.50. It had a similar honey flavour to the Lyme Bay Mead. Again, very nice.

Finally, the Witham Friary Mead. This gave a gravity reading of 1038 and a pH reading of 3.20, it was by far the darkest in colour, similar to a dark/black rum. With a strong, slightly floral/citrus type hint to the flavour. Sweet. Again, very nice, but not as "good" (sorry I can't really define why I felt this) as the Lyme Bay.

So of the 4, my favourite is the Lyme Bay, followed by both the Lurgashall Winery and the Witham Friary ones equally (though again, I can't really explain why I thought they were so different, yet equally as good), followed up in the rear by the Lindisfarne Mead.

Now this is, but isn't surprising. It is, because Lindisfarne mead is one of the better known ones in the UK, but it isn't. Just because you have a "known" brand, it doesn't mean that yours is the best product.

I'll finish by saying that if I can manage to make anywhere near as good a mead as these, then I'll be very happy. At the end of the day, none of them are rubbish, but I did expect the darker ones to be the stronger tasting and possibly the better, but the Lurgashall one disproves the darker is stronger/better idea.

The other thing that was confirmed by this test (and one that I was beginning to wonder about) is that I do, very much, like mead.