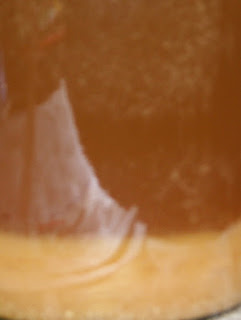 Weird Granular AppearanceThe two basic/traditional mead batches seem to be going OK i.e. the restart/blend/mix batch (12 litres) has got to 0998 gravity and pH of 3.90 whereas the heather honey 1 gallon batch has got to 1003 gravity and a pH of 4.11

The only odd thing is that the heather honey batch has dropped such a weird looking sediment. Very granular in appearance. Almost as it there was wax or something mixed in with the honey (there wasn't as far as I could see). I doubt whether this is a problem, so I'm thinking that I'll strain it out somehow, which should allow the mead to drop a sediment normally.

There's only a small amount of sediment showing at the bottom of the mixed/test batch, so I'll just rack that off it and chuck a campden tablet or two in it and allow it to clear naturally.

Apart from that, these two seem to be going fine.

The 3 batches of the "Joe Mattioli Spiced Orange" mead (whether I used orange or a different citrus fruit) seem to have slowed down. As they've only been going for a month or less, I'll just leave them to settle/clear etc. I did have a small victory today though, I went round to the local "scummerfield" branch for a few bits and noticed that they were doing the "cheap honey" deal again i.e. 2 X 1lb jars for £2.50 so I got 4, with a view to knocking up a batch of the Spiced Orange recipe, but with lemon and lime, though stupidly I went a bought a lime and an orange. I'll get another lemon tomorrow I suspect and make it up then - it only takes about 45 minutes or so to do.

The picture of the granular sediment in the heather honey isn't a very good one, but it does give you an idea how much as settled out of it - it doesn't look like flocculated yeast sediment though - and some of it seems to have attached itself to the side of the demi-john. As I say, weird.