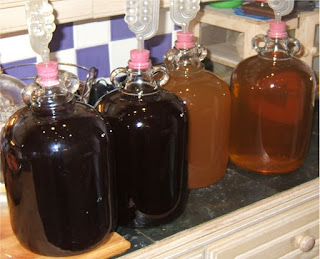 Well as you can see from the picture I've racked both the Kiwi Melomel and the Apple and Blackberry. I haven't been as thorough as I should have been with these as I let them finish in buckets. Not that that should really matter as any air space in the bucket would have been filled with the CO2 that was bubbling out during fermentation.

So what are they like etc ? Well I went (as usual) at it like "a bull in a china shop" as I just wanted to get them both off the lees and into glass. Like a pillock I forgot to take gravity readings......well I just couldn't be arsed really because a small taste I took of the Kiwi Melomel, tasted just like I expected. Like a medium dry white fruit wine, but when it came to the Apple and Blackberry, it still tasted quite sweet and fruity, so I just got it into glass and then the little bit left in the bucket was put in a test jar and when I dropped a hydrometer into it, it showed 1.000 so that's about as finished as I reckon I'll get it given the messing about it's caused me (the restart etc).

I'm thinking that I might just back sweeten both of them a bit, probably with honey. It doesn't matter too much as I'll just leave them under airlock for a couple of months that then think a bit more about how I'll actually finish them.

Still, not bad, if I do say so myself.