So, one of the members over at Gotmead, being a Brit, who now lives in the US, wanted to know a bit about one of his favourite mead tipples.

Now this isn't one that I'd come across before, certainly not when I was trying a few commercially made meads about 4 or 5 years ago.

So the only guide I had to go on, was my own mini reviews. Before today, of the 4 commercial meads I'd tried, I found that they all tasted fine. Sweet, yes but cloyingly so (if you want to read what I said, which is only personal opinion, but I stand by it. They might have improved/changed, I can't say. They were pretty expensive at the time, but I felt I should taste some of the offerings available locally).

Now, after a few exchanged messages with Tony, he explained that as far as he was aware, it was made from Heather honey - which from my own experience, tends to be quite expensive. He ordered a bottle and arranged for it to be delivered to me (didn't matter whether it was a load of shit or not, I thought it was a nice gesture as I certainly wouldn't say no to a free bottle of mead, or any booze for that matter).

Once opened, I was surprised to find that the bottle was different to how I'd expected it to be. I suspect Tony hadn't had any for a few years and the bottle is nicely done, if a bit "generic corporate", in label design. There was no mention of heather honey, but some of the wording made me thing that it had been made elsewhere as it was "specially selected". A term you see when supermarkets buy in something made somewhere else, but sold under their label/branding. I have no way of knowing if that might be the case. 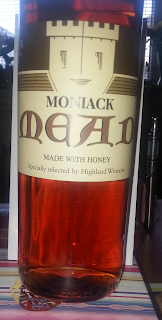 So not the best of photo's but enough that you can see it's a nice colour, a reddish amber of medium sort of darkness (actually looks better in daylight, but I had to put a piece of white paper behind it so the colour of the liquid wasn't blanked out completely by the flash).

Ok, so looks fine. Like the greedy git I am, pop the cap and take a sniff.

Nothing remarkable there. Like a traditional mead sort of smell, not in your face aromatics, but given some of the stuff I've read recently and what I'll say further in, I'm wondering if they boil or at least heat the must during the early stages of making......

A decent flavour, not, seemingly, as mega sweet and cloying as the other commercial meads I'd tasted (and I guessed wrongly, more later). Nice, enjoyable. I decided it would likely fall in the the "dessert" mead a.k.a. after dinner, category.

Ok thought me, time to get the hydrometer out. So with a test quantity (eventually I did drink it - well you would, wouldn't you, free mead and all that). The test picture looked like this...... 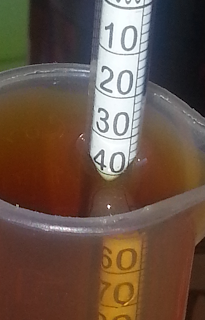 Now, again, not the best photograph. I had to lean the hydrometer slightly, but hopefully it's clear enough so that you can see it was measuring 1.036......

Which is higher than I thought it would be, given that it was sweet but not cloyingly so like my previous tastes of commercial mead were. I thought it might tip the scale in the mid .020's or so.