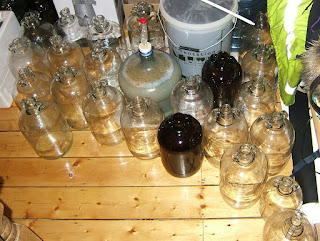 There I was, bidding on a batch of 6 x 1 gallon demijohn bottles (ebay obviously), had the winning bid until about 10 minutes before the auction ended and I get "zapped", I noticed in time to get 2 more bids in, to no avail. The other bidder was either using sniping software (bastards), or more probably just made sure that they had a higher maximum bid. Whichever it was, it wasn't me.

So being a bit pissed off, I quickly had a look back on ebay, only to find another seller had demijohns for sale, but the offer was a "buy it now" for £1.50, only for a single jar, but apparently had lots more. Bugger it thinks me, I could see from the location, that they were only about 35 to 40 miles away, so I clicked the "buy it now" button, for one, but then emailed them to say that I was interested in more.

The seller was brilliant, they replied to my email almost immediately with directions, so I crashed the bank for £30 and jumped in the car. The picture is of most of the 20 jars I bought off them. Still a bargain, considering if I'd bought that many from the local HBS (Home Brew Shop) they'd have been brand new, with a nice sticky label on them (which is a PITA to get off) and cost me just under £100. So at £1.50 each and the £10 or so in petrol, they're still less than half price of the new alternative.

Well pleased.
Posted by Fatbloke at 19:26