More about my "treasure"! 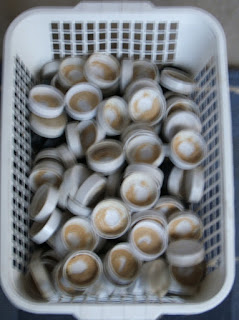 Ok so along with the mountain of demi-john brewing jars I got from ebay, the bloke also threw in an old tyle adhesive bucket full of lids. Some had been used some not. They were really skanky. Covered in years of dirt, mould, etc. So I've spent the afternoon picking the old "seals" out of the caps. I had hoped that they'd just be pushed in, but they weren't, they'd been glued in. The actual seals were made up of a couple of layers of paper, that sandwiched a layer of cork, and the layer that came in contact with the original contents of the demi-johns was plastic coated.

The gluing in bit, could have made it a real pain in the arse to sort. Luckily, and partly due to the age of the lids (at least 20 years old), they where glued in with some sort of natural glue (animal based ???).

The picture shows the state of them after I'd picked the seals off (sorry about the shit focussing of the picture, but it's just so you can see what I'm dealing with). 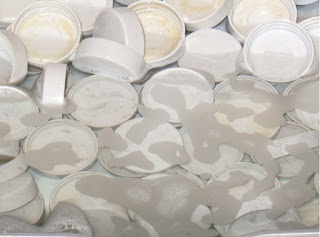 This picture shows the progress. I soaked the lids in warm water with "washing up liquid", a small amount of effort (with a small vegetable paring knife) to remove the glue, followed by soaking them in more warm water, but this time with a little bleach.

As you can see, they're returning to their original white (actually some of the lids are black, but I just decided to clean up a batch, as there was exactly 200 lids in total).

I'm very pleased with my efforts, because it means that I should, theoretically, just be able to find a small amount of expanded polyethylene sheeting to cut out small discs to make new seals for them, and consequently use them to seal some of the demi-johns so that I can make some "sparkling" mead.

If course, I should point out that that will be a bit experimental because these demi-johns originally contained cider, so should be able to take the pressure produced from natural carbonation i.e. a little sugar/dextrose in the bottle before filling. That is then converted into alcohol and CO2 - the CO2 being the bubbles. I doubt that they'd have taken the pressure if I had the facilities to just pump the mead with compressed CO2.
Posted by Fatbloke at 16:49