The "object" of the excercise i.e. the "Treasure" 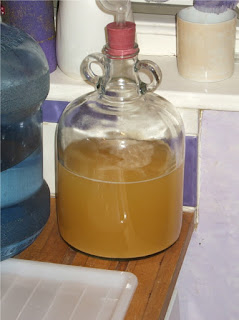 This picture shows one of the 400 odd half gallon demi-johns in action. Actually it's being used to facilitate the "restarting" of the fermentation, of the batch of mead (a "double" batch) where I was testing the Wyeast liquid mead yeasts. For reasons I don't under stand, both of the brews seem to have "stuck". The only cause I can think of, is because I started the ferments using 4lb of honey in the gallon. Which would have meant that the starting gravity (a.k.a. SG) would have been about 1134. That's quite high.

I've had some advice that suggests I shouldn't start a ferment much above 1090. Otherwise the yeast can be "shocked" by the high sugar levels.

Now I can't say for certain if that was why they both "stuck", but I'm now using Lalvin EC-1118 yeast to restart the ferment - both the current brews will be mixed eventually in the 12 litre "water bottle" you can see to the left of the glass container to finish fermenting.