There's treasure in them thar auctions 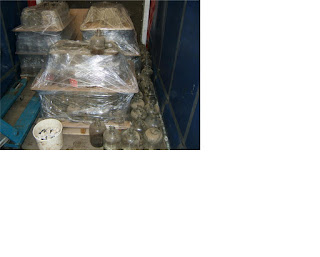 During a bit of hunting round ebay, I found a rather enticing auction. It was for 24 x 1 gallon brewing jars a.k.a. demi-johns. Plus, 409, yes 409 half gallon demi-johns.

In my local "home brew shop" 1 gallon "DJ's" retail for about £4.50 a go so I figured that 24 for the starting bid of £29.99 made them a bargain. They don't sell half gallon ones - historically they've been used for retailing cider in "pretty" jars - that's exactly where the half gallon ones have come from.


I was initially a bit reluctant to bid as I didn't really have a clue what I might do with 409 half gallon DJ's, but I just figured "what the fuck", even if I put them into recycling it was worth the price for the 1 gallon jars.

Well as you can see from the picture, I "won" the auction (no one else bid - not surprising really). The result being the picture I took in the back of the works van that I borrowed to pick them up this afternoon.

It took me a couple of days to scrounge the pallets, boards and pallet wrap, but yesterday I knew I had all the kit necessary to collect them.

As you can see, they're completely "stinking". Not surprising as they'd been kept in a barn for about 20 years. Not that that really matters, as they'd have to be washed/sterilised anyway.

I'm intending to use them for "bulk storage" i.e. I can free up some 1 gallon DJ's for brewing and once the brew is ready, transfer it into a couple of these to age the wine (or mead in my case - mead being notorious for needing to age).

You can probably guess, I'm feeling quite pleased with myself.

p.s. Oh and the bloke who was selling them, was very helpful. He makes cider commercially and kindly gave me a litre bottle of his product - He doesn't appear to have a website but sells some though Middle Farm. I'm sipping a pint as I type this, it's a medium sweet, a bit "woodpecker" tasting, but it's 8.4% ABV, and a damned nice drop :D
Posted by Fatbloke at 18:57