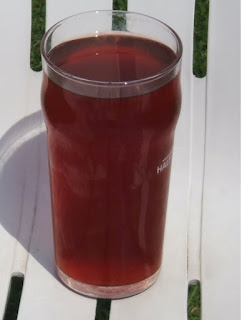 I'll admit that I couldn't recall what exactly it was i.e. I'd made some "Winter Mead" as well but couldn't for the life of me remember if it was this or I'd already got it bulk ageing.

Anyway, after ploughing through the blog I managed to work out that this is the Barshack Ginger recipe.

The picture doesn't show how clear it was in the bottle - the pint in the piccy is from the bottom of the fermenter so I'd expect it to be a little more cloudy.

Plus, if I wasn't so bloody hap-hazard in my wine and mead making, I'd have known which recipe it was and what the added fruit was. Either way, I managed to get 3 and a half imperial gallons from a 19 litre batch (I ditched the last bit as I couldn't be bothered poncing about in putting it into something to try and remove a bit more of the settled sediment).

The only thing I knew for definite, was the last time I racked it, I added 700 grammes more honey, which seem to have fermented out (the gravity is currently .995) and that because I was being impatient, I added some of this "wine smoother".

As I haven't got a "yard stick" to tell by, I can't say how well it's worked, but it's smooth enough for my tastes, not as rough as it was when I last tasted it (first racking in Feb last), and overall, I'm pleased with how it's turned out - I'm happy to leave it in the 3 X 1 gallon and 1 X 1/2 gallon jars it's been racked into (and campden tablet added) too "bulk age".

In other words, now it's done, I may think about bottling it in a couple of months time, but that depends on whether I can get some champagne type bottles/stoppers, or whether I can get enough "beer" bottles and crown caps (easier of the two options), or whether I can be bothered and just change the stopper/airlocks for just stoppers/corks and leave it under the stairs.

What else have I done ?

Oh yes, I've racked the "Heather Honey" batch again, as the "straining bag" trick either didn't work or it's just allowed some more of the granular/globular sediment to settle out. I also topped it up with a further 8 oz of honey and water to up the gravity. It was at about 1005, so I'm hoping that the extra honey will have brought it up to 1015, as I want a sweet mead from this honey - oh and when I racked it the first time, I tasted the granular stuff and it was sweet so I'm wondering exactly what it was, but suspect if might be pollen/sugar that's taken on this appearance for some reason - unknown to me (I looked at the honey this time round in the daylight and it seems that there was some granules in it - they tasted sweet as well so I'm not really any closer to understanding exactly what they might be.

Over all, it has a nice "honey" aroma, though the taste is still a little raw (to be expected).

I'll post another picture when it's cleared some more.