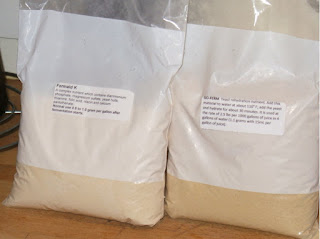 So, pictured is my latest purchase.

It might not seem much, just a couple of bags of powder. Except that these products (as per the labels - Go-Ferm and Fermaid-K) are probably harder to find in the UK than "Class A" drugs!.

Why? I don't know for certain. They (well, specifically the Fermaid-K) seem to get mentioned quite widely if you read up on anything to do with wine making, specifically "home" wine making.

No one seems to stock either of them in the UK, though I'd guess I might be able to get it directly for Lallemands UK office/representative(s), if I could find out where they are, and could afford however much the "minimum" is.

I had to get it from a "shop" on ebay, who are based in Texas (Dallas I think it was). Now it doesn't work out any cheaper from the locally available yeast nutrients (actually there doesn't seem to be any local equivalent of the "Go-Ferm" anyway).

I've never used either of these products before (only the "local" stuff), so I can't say what they work out like or "taste" like when they've been used in making a batch of mead/wine, but I'll post how I get on with them, as and when.

The ebay "shop" I got these from is Nashwood Winery. So if you are interested you can also look to see if you think it's worth the effort. I was "carded" for them on Thursday, so it took about 8 days for them to arrive from the US, which I didn't think was too bad - of course, you could also probably arrange to get them quicker, but it'd probably cost more in shipping charges.