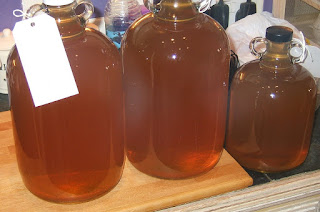 Anyway, today, the intention was to rack the "failed experiment" mead - by failed experiment, I mean that when I started this, it was 2 X 1 gallon batches, of the same recipe but made using the Wyeast Liquid mead yeasts (1 pack of sweet and 1 of dry). It all went "pear shaped" because both gallons "stuck", they did seem to start fermenting but promptly stopped. I'm not sure what the problem was, maybe too much honey, maybe not enough nutrient, maybe not enough oxygen at the start.......

So I ended up mixing both together (in a 12 litre water cooler bottle) and then adding a bit more honey (1lb I think it was) and topped it up with water. I then treated it as a "stuck ferment" and re-started the fermentation. This seems to have worked, but I can't remember what the yeast was that I used to restart the ferment.

It's already been racked once, so this was the second time (bugger, I've just remembered that I didn't add any campden tablets/sulphite - I'll chuck them in later). The result is the picture above. It doesn't taste anything special, just a dry, unremarkable mead. So if it doesn't age well it doesn't really matter, as I also noted from the quick taste during the racking that it's not got much body. So I'll just age it, as per the picture, and if it's still lacking in 6 months or a year (when I decide to check it) I can just add a little more honey to sweeten it and then maybe add a little glycerine to improve the "mouth feel".

I'd also intended to rack the last of the 5 X 1 gallon batches of "Joe Mattiolis' Ancient Orange Mead" that I made. Actually, only 1 gallon was made to the original recipe i.e. using orange. 1 was made with lemon, 1 with lime and the other two with lemon and lime - though the lemon/lime gallons had different yeasts. One with bread yeast (as per the original recipe) and one with Lalvin 71B wine yeast.

I racked the first 3 a couple of weeks ago, but forgot all about posting a mention. Today, I got both the DJ's out, but when I lifted the news paper covers, I notice that the fruit is still floating so I just put them back under the table in the dining room. I'll check them in a month or so.
Posted by Fatbloke at 17:38