How the ingredients are looking ATM! 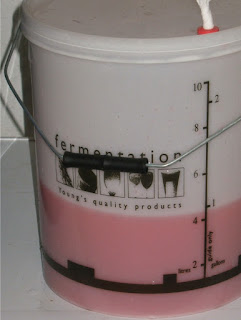 Raspberry and Apple Juice
This evening, I've strained and pressed the raspberry and apple pulp (from the fruit picked on Saturday). It's had 2 days as pulp, the only additives being a crushed campden tablet and 2 teaspoons of "Pectolase" (pectic enzyme). The idea being that the campden tablet should prevent bacterial infection and kill or at least reduce any wild yeasts (a.k.a. mould) that might have been on the fruit and been missed when I rinsed it under cold water. I didn't heat it at all, because I didn't want to have a "cooked" taste from the fruit, which is very possible with some fruit - especially apples.

Anyway, I also mentioned about getting some "free" fruit from my aunt. I went up there yesterday evening and came away, not only with some more apples (sharp/cooking), the blackberries and red currants I mentioned in the other post, but also about 2lb of elderberries. 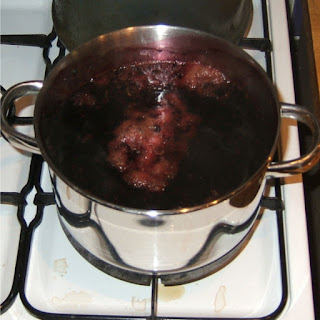 Elderberries, simmered for 10 minutes Now elderberries grow profusely around "my neck of the woods". I've been intending to try them for a while, but not managed to get any picked before the birds give them a hammering. So to get the 2lb or so from my aunt was a bit of a bonus.

When I got them home, I "de-stalked" them by flicking them off the main stalk with a dining fork. There was a tiny amount of stalk left where some of the berries/stalks had broken away from the main branch of the stalk.

Initially, being unfamiliar with elderberry, I wasn't quite sure how I should be dealing with them. So I added the berries to 1 pint of water, and added a campden tablet and a teaspoon of the pectolase.

When I got home from work this evening, I check the WAH site, as I'd asked a question about how I should be extracting the juice. It would appear that the berries must be heated, as there is a naturally occuring chemical (I forget the name of it) which is generally harmless, but some people might have a sensitivity, so the advice was that the berries should be heated. When I was looking at/for recipes yesterday, there was various suggestions about how long they should be cooked/simmered for, so the picture is of the berries/water mix after it's been simmered for 10 minutes. Tomorrow, when it's cooled, I'll strain/press then to extract the juice and add it to the bucket with the apple/raspberry juice.

What's this gonna taste like ? Well I haven't really got the faintest idea, other than it'll be a fruity tasting red (possibly rose). I have had a little try of the apple/raspberry juice, that tastes like.....well...... apple juice that's a little tart, with a hint of raspberries. Like a cheaper juice of the same mix that might be bought in a supermarket. In other words, not bad at all.

It'll be darker when the elderberry juice goes in, and I hope they won't "swamp" the taste of the raspberry. We'll see eh!