Summer Fruit "make it up as you go" wine 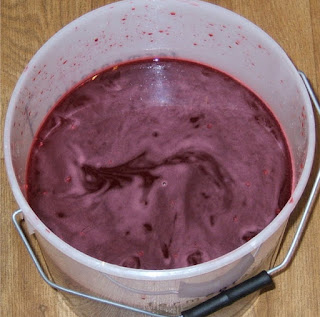 You should be able to see from the change in colour (from the picture of the bucket in the earlier post), which means that I've strained and pressed the elderberries.

I've very pleased with the colour that the fruit juice has ended up.

What else have I done ? Oh yes, I checked the gravity and was surprised to see that it was only at about 1020, I'd have thought it would be higher given that it's about 90% fruit juice, so to modify that, I've added 3lb of honey, which means it's more of a melomel than a wine (fruit mead, that is). The gravity was up to about 1090, which is fine, so I then added a quarter teaspoon of "Fermaid-K" for nutrient (I haven't got any scale that will weigh 1 gramme so I had to get close with the quarter teaspoon measure that holds 1.2 ml's).

I'm also rehydrating a packet of Lalvin RC212 yeast - which is apparently the best one for colour retention with red coloured musts - though it needs plenty of nutrient at the start as it can produce H2S (hydrogen sulphide) if not. It's being rehydrated in a milk bottle, but rather than just 15 mins in 50 ml of water that was 40C, it's in about 150 mls of water, that's got a 1/4 tsp of "Go-Ferm" at 40C (Go-Ferm is a rehydrating nutrient, not a general nutrient - which shouldn't be used).

I'll probably be ready to pitch the yeast in the morning before I go to work.