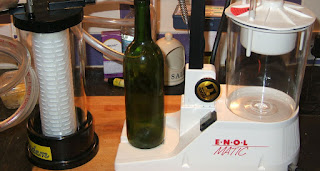 More "treasure" Ok so I managed to get another "bargain". Not so much of a bargain as as the "half gallon demi-johns", but nevertheless, it was a hell of a lot cheaper than I'd expected to pay for such a machine.

What the hell is it ? Well it's an "Enolmatic" vacuum bottling machine (on the right), with a matching "Tandem" filter on the left.

Normally, the bottler, the filter housing and the filter element (inside the filter housing) are all sold separately. When I was actually pricing these items up, the few suppliers I could find indicated that it was gonna cost me in the region of £400 to £500 i.e. damned expensive. So when I asked in a local Home Brew Shop for his "best price", I had to "snap his hand off" when quoted £200.

It's not that this is a necessary piece of kit for a home brewer (of wine etc), more of a case that it's quite a flexible piece of kit and can be used for storing/bottling various liquids, not just wine. It can also be adapted for moving wine, from one demi-john jar to another, whilst it's getting filtered and de-gassing at the same time.

So yes it is a bit of a luxury, but it means that I can now do some of those tasks a hell of a lot quicker. I mean, using a gravity filter works fine, but when the filter starts to clog, it's down to gravity and it can take a hell of a long time to filter a gallon. So it just highlights how vacuum is better than gravity in these instances.

Oh and I suspect it's normally quite expensive as it's often used by either larger home brewers or smaller commercial businesses and as anyone can usually see, anything that can be applied to business attracts a premium.