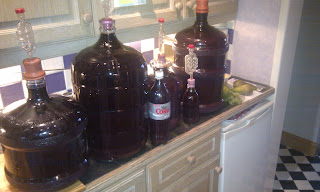 Ok, so as you can see from picture, I got round to pressing the grapes. Which was a little more than I'd planned for. I suppose I had some false mental image of it being "straight forward" and easy.

Air lock action, despite it being a poor indicator of where the ferment has got to, had stopped and the last lot of gravities from the buckets suggested that the fermentation had slowed/stopped. Shows how much I know doesn't it! Ok well I know the theory etc but didn't carry it out, as I was probably a bit over excited to be doing this, with "real" grape.

Before pressing, the 4 gravities in the buckets ranged from 1.002 for the single box bucket (10 litre), too the pure Merlot batch which gave me 1.012 - and as I'd stupidly forgotten to take a gravity reading before pitching the yeast, I don't really know what the alcohol content is, but it will be somewhere in the 17 to 18% area.

I've complicated things a bit as well, because I PM'd Brian on the forums as he's selling frozen grapes, de-stemmed, crushed and sulphited. He sent me his last drum of Shiraz grapes (which is what I'd originally asked for, for Grapefest, but when he went to collect them, all the shiraz had gone - he'd obviously got his grapes for freezing before getting the Grapefest ones). It arrived on the Wednesday, it took till the Friday to defrost, then I mixed in more sulphite and Rohapect enzyme and left it until after I'd pressed the other grapes.

Now this time, I did manage to take a gravity reading after I'd added the honey, but before I pitched the yeast. The 25 litres of pulp and 2kg of honey (working on how much pulp, may have come from boxes, and too keep the ratio's of honey to grape, I guesstimated that 25 litres of pulp had come from 4 boxes of grape, hence using 2 kg of honey, or 500g per box estimate) gave me a gravity of 1.122, which is high for a grape wine, but only moderately high for the mead world. I didn't bother rehydrating the yeast, just sprinkled it on top and gave it a stir.

Now this is a bit weird, because if I guessed correctly, then it will have had 750 grammes of honey per box, whereas the actual grapefest ones will have had 1kg per box, and when I checked the grapefest ones yesterday, I was getting about 1.000 from them, which would be over 18% - which I know is feasible with meads, but not normal with grapes - well not normal as far as I'm aware.

It's just hard to work out, because I'm comparing batches when only 1 of them actually had a starting gravity to work with.

Ah well, never mind, I'll just continue to monitor the shiraz batch and maybe add a further half to 1 kg of honey. Worst case scenario will be that I just blend the lot for this year.

After all, I forgot to label the grapefest batches in their fermenters, so I don't remember which is which. Bloody helpful if I wanted to compare the differences in Grapes etc. Yet because this is my first go with real grapes, I'm not overly concerned.

The pressed batches currently taste like a nice, slightly off-sweet, fruity and well rounded red wine. Once I decide what I'm gonna do next, I'll rack them off the sediment and probably add some Oak, but I haven't worked out how much to use yet, as it'd probably mean that if I need a lot, I'll have to find a half barrel and after cleaning up the wood, toast it myself and take it from there.......