Ok, so if you find this and you don't happen to be a Brit or have any Brit relatives, you might have to look up Christmas Pudding.

It's a typical, traditional heavy(ish) steam cooked pud. Lots of dried fruit, nuts, beer, spices, suet and a number of other ingredients, served after the main course on christmas day, traditionally (served with either double/heavy cream, or custard a.k.a. "creme Anglaise" and possibly "brandy butter" or "whisky butter" or in my case both the double cream and brandy butter).

Anyway, the nature of a flour, fruit, etc based pud does make for a rather strange ingredient in a mead.

Actually, I'm taking no credit for this recipe at all, because over at winesathome, it's the fourth recipe in the new wine makers section, which I believe Bob, who runs winesathome put together, though it does seem that Karl was the person who prepped the info on the website, the recipe and method for the wine are here.

All I'm doing, is to "meadify" the recipe and where it says about adding sugar, I'm using honey instead. 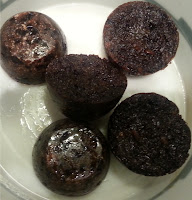 This is what the crimbo puds look like when taken out of the packaging. There's actually slightly more than the recipe states but because I'm an ingredients hoarder, when I find them cheap I always buy at least enough, usually a bit more just in case I need it. Each pud is a 1lb/454g pud and I'm making a 2 gallon (imperial)/9 litre batch. 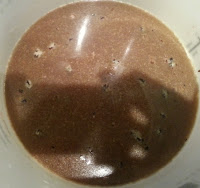 Now follow the instructions for the method, this is what it looked like after I'd added the hot water and chopped the puds up into pulp. Yes, I've also heard of the parallel description to a bucket of diahorrea too.....

Now I'd originally thought that I was going to have to use Lalvin K1-V1116 yeast, as I thought that's what I'd have available, but when I went to dig the yeast out, I found that I didn't have any of that, but purely by chance, had a single pack of the Gervin GV4 yeast that Karl detailed in the instruction/method at WaH, so it was mixed up as per the instructions and as you can see it was just waiting for me to do the rest of the stuff that's listed.

The tinned peaches and the juice of 6 oranges (remember, I'm making a double sized batch of 2 gallons). 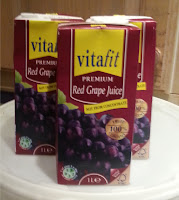 Here's the grape juice I ended up using. I couldn't get any white grape juice so had to make do getting red grape juice instead, not that the colour will matter very much, as you will have observed from the picture above of the basic mix, the liquid is quite "brown" looking already. 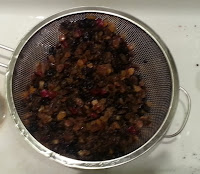 Here's the kilo of dried fruit after it had been rinsed under hot tap water, as per the instructions, to remove as much of the preserving oils that they like to spray this with during the production process. 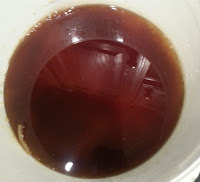 Here's my contribution i.e. the honey. Well not all of that. That's about half a bucket or about 12.5 kg. I got to the bit in the recipe about adding the sugar and took a gravity reading and it was at about 1.055, so I knew I'd have to add honey to get it somewhere around the 1.090 mark.

If you really want to be anal, you can click the image and you should be able to get the full sized one, that shows I managed to get it to 1.085 with 3 large kitchen serving spoons full of the honey after I'd mixed it up. So in the spirit of being "hit and miss" with my usual method I then added about 1/3rd of the same size spoon I'd been scooping it out the bucket with. I didn't bother with a further gravity reading, as the yeast is capable of 21% ABV and while Karl points out that the recipe aims for 18% ABV, if it's a bit stronger it doesn't really matter, as it's meant to be a sweet, dessert wine. 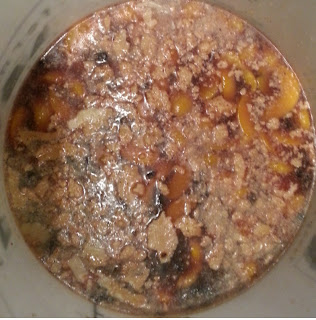 This is the picture of the must after it's had all of the ingredients mixed in i.e. all the ones mentioned above, plus the yeast nutrients, the vitamin B tablet (which wasn't really needed as I used "combined" yeast nutrient - actually it was Lalvins FermaidK), etc etc. The only thing I haven't added so far, is Bentonite. I thought I had some, but when I came to dig through my home brewing chems, I find that I must have used what I had up, and only have "precipitated chalk" and "Irish Moss". Bollocks to it, the only reason why the bentonite would be in there is to help with clearing later on. I can sort that out another time.

Of course, some would worry about the pieces of congealed fat from the crimbo puds floating on the top, but I'm presuming that as it seems to be quite a quick fermenter (anecdotally of course - I'll have to wait and see), all the "gunk" will be strained away when I move it all to secondary, which at the moment is likely to be next weekend, but I'll have to wait and see won't I.

I'm pleased to have finally got my finger out my arse and got this mixed up. I've had the crimbo puds for 2 years waiting to be made into this.

I'll post a bit more tomorrow, once I've added the rest of the honey (as per the recipe linked above).....