Well Bochet is a mead made from burned or caramelised honey. It's sort of been on my "todo" list for some time.

The problem is, well was, that when it comes to caramelising the honey, you have to have a large pan and be very careful. It's thought that the honey expands when boiling like 3 possibly 4 times and it's hotter than hell. If it gets on the skin, it's like being burned with molten plastic apparently. Well after all, it's molten sugar so it'd just be boiling wouldn't it.

Anyway, one of the members over at Gotmead or was it at Homebrewtalk (doesn't matter as it's the same person i.e. WVMJ/WVMJack) said about caramelising honey, but instead of an open pan, to use a pressure cooker. He likened it to boiling cans of "Condensed Milk" to make the toffee flavoured stuff like you see on "Banoffee" pie. The same thread (at whichever forums it was at) someone else also suggested using a "slow cooker" type crock pot pan/device. Now I didn't want to fuck up the slow cooker as I'd still have to make sure about adding water periodically, because apparently if you use an open pan, after a while it starts to thicken up and then needs to be watered down so that the boiling honey doesn't end up like very hard toffee when it's cooled down. 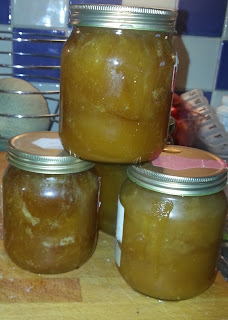 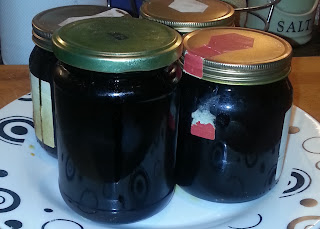 This is what it looks like after its been in the pressure cooker for an hour. The jars were still hot when I took the picture, but you can see that it's become a lot darker.

The suggestion of using a pressure cooker was to do with, when using an open pan and direct heat, you can caramelise the sugars too much and the honey, well the sugars in the honey can become too dark/burned and it may cause problems when trying to ferment it. I can't say what the pressure etc was for the pressure cooker, as I just put the jars in, filled it half way up the level of the jars with water (the trivet was in the bottom to keep the jars off the bottom of the base of the pan). I understand it's possible to use it to cook with a reduced pressure but from memory, it would have had about 15lb pressure of steam.

I didn't do a perfect job either. The remaining water showed signs that at least one of the jars must have leaked a bit. Yet the jars all still seemed full, so maybe it was just that the heat increased the pressure inside the jar(s) a bit and forced a bit of the honey out into the water. I'll have to see how it measures up when I mix it with water and measure the gravity before pitching yeast into it.

My limited knowledge of this means that I'll have to wait and see what it's like once it's cooled, whether it sets/goes hard or not, and whether I need to mix it hot or with hot water to dissolve it or not. This is very much, a voyage of discovery for me. I haven't completely made my mind up yet, but it may be my first attempt at a stir plate recipe. I'm only going to make it like a traditional anyway. It's a good excuse to try out the nutrient bit's I swapped with another person from the forums who's local(ish) to me. I sent him 50 grammes of GoFerm and 50 grammes of FermaidK and he reciprocated by sending me 50 grammes of Dynastart and 50 grammes of Nutrivit. GoFerm seems to be the same as the Dynastart and FermaidK the same, well similar at least as the FermaidK - I say the same, the products are designed to be used at the same time in the same way.

I'll have to have a think, because I'm intending to use the 5000ml erlenmeyer flask as the fermenter, but haven't yet ordered the bung for it (it's not the same size as a 1 gallon demi-john fermenter, it's neck seems to measure 40mm), but I can just use a bit of cling film and an elastic band as it shouldn't be an issue as the yeast will produce enough CO2 to protect the surface until it's finished and then I can just rack it to a DJ. I'll have to have a bit of a read to work out how much of the nutrient to use as I'll probably be doing it as a staggered nutrient (probably only in 2 parts though). 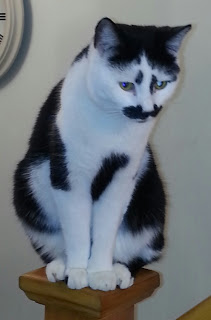 Here's a picture of Charles the cat, who was perched on the newel post of the stairs being nosey. No particular reason for posting the picture, just that I hadn't seen him sitting there before.......

I would never have thought to use a pressure cooker, but it makes good sense. I have to try this soon.

He's called "Charles". We have him and his brother, but they both came from one of the Animal rescue type places who'd called him Charlie Chaplin, because of the moustache marking, and his brother was Santa.

My partner said she didn't want to keep those names as one was too dated and the other seasonal, so we just change them by calling them as Charles and Stanley.

I also sometimes refer to them both as "the Ninja Gut Buckets". They managed to sneak up completely unheard and they like to eat just about everything......