"Has anyone used this company" ?

Some time ago, loetz, a newish member over at Gotmead forums, asked the title question. He posted a link, which turned out to be a honey dealer in Germany (loetz give his location as Austria). So on the basis of the question, I had to say no, but this morning......... 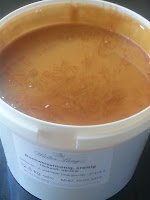 It was a bit of a trial initially, as the linked website was only in German, but on saying that on the forum, loetz was kind enough to re-link it through the Google translate facility (the entire site/page ? not sure as I've only sussed out how to use that with a single page or paragraph). The fact that they've only currently got their website set up for selling/delivering to German addresses hasn't proved to be an issue either. As you can see from this (hopefully), it does make for interesting reading, despite the occasional short comings of Google translate. It enabled me to email them and ask. Their shop staff were very helpful, sending me details and a quote for both the honey and shipping. I know roughly how much honey can cost for a varietal honey, and their quote for €112.23 which included all the tax and shipping element, still worked out reasonable. Obviously it would have been a bit cheaper if I'd ordered a 25kg bucket instead of a 12.5kg bucket, on a price per kilo basis, and likely a little more on the shipping. Either way, it worked out fine, and after a short delay of making the payment (which was equally as painless, just a phonecall to my bank, and supplying the Walter Lang swift and DBAN codes, it was all sorted. I emailed them to say about the payment being on it's way and that my bank expected it to take 2 working days (I called my bank on the sunday). The shop people from Walter Lang were kind enough to notify me that they'd received the payment by the monday afternoon and it was shipped on the tuesday. The delivery people carded me on the thursday and I've been to the post office (the delivery this end was attempted by ParcelForce, and under their "convenient delivery" arrangements, they left it at the post office) this morning to collect it. Overall, it's been excellent to deal with the people at Walter Lang (who now seem to have got an english language bit on their website - well done, brilliant). I'll happily deal with them again. For the varieties I can't find locally....... As for the honey itself ? It's not as dark as the descriptions that are sometimes posted around the bazaars in respect of Buckwheat honey, but this batch is from the Ukraine. It's similar to the bucket that Male (a member over at Gotmead, who's in Poland) helped me to get a couple of years back. Less like the descriptions of the stuff from the US. Certainly not "farmyard" in character. In the case of the two buckets I've had/got, it's not so sweet tasting as many varieties, has almost a malt-like character to it. I'm looking forward to making a traditional batch from it. Someone said that at last years Mazer cup, there was a Polish Buckwheat tradtional that did very well, producing an excellent mead....... Pip pip !
Posted by Fatbloke at 09:44

From my experience traditional mead from buckwheat honey needs 3 years of ageing.

Doesn't surprise me to read that Marek.

Yet, that's less of a problem as I'm so lazy with my mead making, I just get them finished and clear, even sweetened to how I want them, before putting them into 1 gallon glass, and under the stairs - some have been there at least 5 years.......

I know I should really get some of it in bottles......